Why Are Only 5th Graders Allowed on the Green Jungle Gym?
by Neve D. 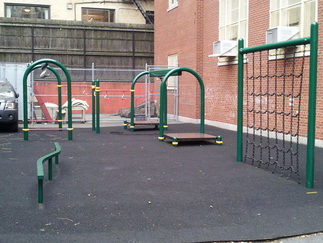 I find it unfair that only the 5th graders are allowed to play in the green jungle gym. Other kids should also be aloud to play there. I think that the only reason that they do not let other people play in the green jungle gym is because it is dangerous. Another reason why everybody should play in the jungle gym is because it really helps to have fun at yard. All of my friends play tag with me in the other jungle gym but we keep getting hurt since there are so many people. I personally think it is not very dangerous and that other people should also be able to play there. I have decided to interview Ms. Fuchs to be able to learn more about this…

If one other grade would be able to play in the jungle gym, which one would it be?

Ms. Fuchs said that if one other class could play in the green jungle gym, it would be the 4th graders. I think that 4th graders are still lucky because at the end of the week, one class can play in it.

When was the jungle gym made?

Ms. Fuchs said that when they were renovating the yard, the builders made the green jungle gym without asking and just left it there. She also added that in the next few years, they will do more renovations and maybe do something with the jungle gym.

Now I understand more about the safety of the yard and I will still respect the yard rules, even if I find them unfair.