Stages of Learning
by Isabella A. 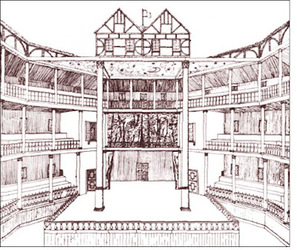 The Globe Theater in London
Stages of Learning is really good for fifth graders because of many things. First of all, it inspires kids to think outside of the box. It shows kids how to express their feelings. Second of all, it prepares students to learn Shakespeare by starting with an easier version that is more understandable. Later in middle school, high school, and college, students will have a more complex experience with Shakespeare.

Albert and Todd are our instructors for Stages of Learning. Todd says “When I was in middle school we only read out what the play said. We learned no background, vocabulary, or other things. We all sat at our desk, we did not have much fun.” Albert agrees “In contrast to this, in Creative Stages you get to learn in a fun way that prepares you for more advanced literature. When you are on the stage and are actually living it you get deeper and learn better”. Both of these opinions support why Creative Stages is such a good program for us fifth graders.

When kids are on the stage and acting they learn to express their feelings clearly. In sessions they learn different techniques for acting and through these they can learn other skills for the real world. Some of these skills are focusing, working together, and talking in front of people. Working with others is a skill you will need throughout your whole life. You begin to learn old English that later on, you will go deeper into. Not only does it prepare you in those ways, but also later in school you will need to present things to many people. In Creative Stages you can practice speaking clearly with eye contact and good volume.