A Downside to Rainbow Loom
by William D. 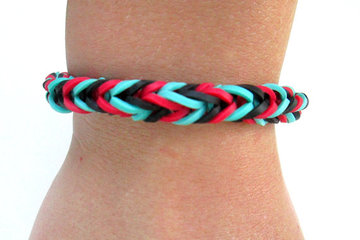 Rainbow loom: the newest trend in P.S.6. Now sweeping the nation faster than Silly Bands ever could. They have already sold more than 1.2 million units! Many students are bringing kits to school everyday. But is it really all fun and games? Some teachers think other wise.

For example, an assistant teacher in fifth grade says, ‘’When some students go on the rug they do not pay attention or don’t care about anything except their rainbow loom bracelets, and when they use their rainbow loom they don’t take in much from the lessons their teachers are teaching”. The purpose of school is to learn and focus for the future. Instead of learning, students focus on rainbow loom bracelets during lessons. This is what this assistant teacher is saying.

Another reason why some teachers think that rainbow loom is not a good influence is because it makes students and children anti-social. For example, another fifth grade assistant teacher says ‘’It makes kids jumpy after yard because they do rainbow loom during yard and they can’t get their energy out while doing rainbow loom”. She also said that ‘’It makes kids anti-social because kids should be playing with their friends or making new friends”.

Furthermore, according to other fifth grade teachers, most rainbow loomers focus on rainbow loom all day during yard. Yard is the time of the school day to get exercise, and exercise is significant to a child’s life. Without any exercise, you can add up on the calories while you are just looming the day away. That, as you know, is not good. In fact, that is actually very bad. The only reason for this is as you know, rainbow loom. If you don’t exercise, you will not be in good condition. One fifth grade assistant teacher said, “ Some students never exercise during the school week. All they do is play with rainbow loom. Also in lunch, many kids make bracelets on rainbow loom instead of eating”.  Eating lunch everyday is critical. In order to be in good shape and not get sick, you must eat! Soon when you know it, your child will slowly start to get more thin and thin because they are not eating lunch at school. That is scary. Eating lunch is just too critical for a child’s life.

Now, is rainbow loom really all fun and games? Is it really necessary? Students should not, from this evidence, bring rainbow loom kits to school. It is just too much of a distraction to students. It will probably even affect their grades. Teachers will think that students only focus on rainbow loom instead of schoolwork. We hope this information will help form your thoughts. What do you think? You be the judge!