Is Splitting Up the Yard a Good Idea?
by Madeleine M. 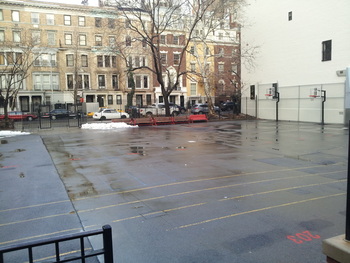 Is splitting up the yard a good idea? Lately a lot of kids have been angry about the new yard set up.  Some kids say that it’s unfair to the people who don’t like to play sports. Some girls have argued that there is so much for the boys to do and no activities for the girls. Another problem with splitting up the yard is that the sports are starting to work their way in to the space for everyone. I asked Gabi, a fifth grade student, on her opinions and she said: “I think it’s unfair to the kids who don’t play sports” (half the grade).  She also said that it would be fairer if there were a bigger space for the kids who want to play sports

Another problem with the yard is that there are no balls, jump ropes, or any outside toys allowed.  This means there is nothing else to play with if you don’t want to play sports. Last year the yard splitting was okay because there were other things to do.

I asked Isabelle, another PS6 student, to share her thoughts on this issue.  She said, “it’s annoying that some kids use the equipment irresponsibly and then get sports. While the kids who are responsible get nothing.”  I asked 5th grader Annie on her point of view and she said, “I don’t think that it’s fair because kids who are responsible and did enjoy those toys don’t get that anymore while some of the kids who didn’t use it properly should be punished.” Annie also said that the new yard set up is not going well because kids who play ball have balls flying all over the yard. This creates a lot of dangerous play and injuries. Annie also said, “I think that this yard set up is just not working as well as the old one.”

In conclusion I think splitting up the yard is a bad idea because it’s dangerous, unfair, and no one has a say in it.