Science Fair at PS 6
by Gabriella A. 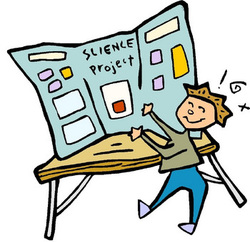 Raise your hand if you love science!  Do you think you get enough of it? Well, science is an important subject for me and I definitely could get more of it.  So the idea crossed my mind that our school could have a science fair! It would be an educational learning experience and would open up the world of science to students. I interviewed parents and teachers on their views and opinions on this proposal.

Firstly, I interviewed the fifth grade parents Ms. Bean,  Ms. Gold and Ms. Brookman.  All of them except Ms. Brookman agreed that having a science fair was a good idea.  Ms. Brookman was concerned that students might not actually be doing their projects.  To her it seemed that “parents usually end up doing most of the work”.  On the other hand, she admitted that, if the students actually did the studies, then it would help students to learn.  The second parent I interviewed, Ms. Bean, believed that with a science fair “kids would become interested in science”.  She also thought it would “encourage learning and experimenting” in the classroom.  Similar to this, Ms. Gold felt that a science fair would be a big step toward the idea of developing “a love for science while kids are young.”  She took it a step further, unlike the other moms, by agreeing with me that the fairs should be competitive in order to “add more excitement for the kids”.

Along with parents, I interviewed two teachers, Ms. Godshall and Mr. Reed, who both approved the idea of PS6 having a science fair.  Mr. Reed, the science teacher, thinks it would be a “great opportunity to celebrate people’s work and learn about new topics”.  And Ms. Godshall, too, feels that “all schools ought to offer an enrichment science opportunity for the students . . . science fair is a fun way to do this”.  A very encouraging point from Mr. Reed is that he has “considered a science fair but have not yet set the wheels in motion.  If enough students show their interest, it is a possibility”.  In addition, according to Ms. Godshall our school has “good structures in place to support a science fair with Mr. Reed and myself”.  Based on the answers I received from the two teachers, I feel confident that adding a science fair to the school curriculum will not be a challenge, as long as the students and staff both put in enough effort.