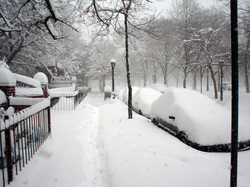 Have you ever been upset because on a day that’s freezing cold and snowing, you have to trudge all the way to school with your boots filled with wet snow?  You might want to know why.  This article is about how there are many reasons why you have to go to school, and who’s making you do this.

I know what you’re asking.  Who is making you do this?  The mayor and the Chancellor are.  They’re in charge of public school, and private school is in charge of their school, meaning that they get to decide if their school has school or not.  This may seem unfair, but isn’t school important?  The mayor and Chancellor may be trying to give public schools the best education they can get.  Also, there have to be a certain amount of school days, (2), that can be taken off, and if you have more than that, you have to take off a day when you should be having vacation. Read on to see what students and adults think about the topic.

Here’s what Peter of class 5-301 thinks.  “The Chancellor does this so she doesn’t look bad!” he claims.  Another opinion is the Chancellor and Mayor do this so public school kids can get in as much school time as possible.  One person who thinks this is Rachael Roizer of class 4-328.  “It’s common sense”, I like snow days, but The Mayor and Chancellor have a point.”  Some people think like that, but others think differently, which brings us to our next opinion.

Here’s the next opinion.  Andrew Zeidel, from class 5-302 thinks with heavy snow, you should have a snow-day.  “For kids that live far away, the transportation is really difficult and dangerous.  Buses can easily crash, and cars could get stuck easily.”

Obviously, there are many opinions.  Which one is the strongest?  It’s a debatable question.  Next time you walk through the ice-cold snow, ask yourself, “Is this really worth it?” or “Is this for your education?”